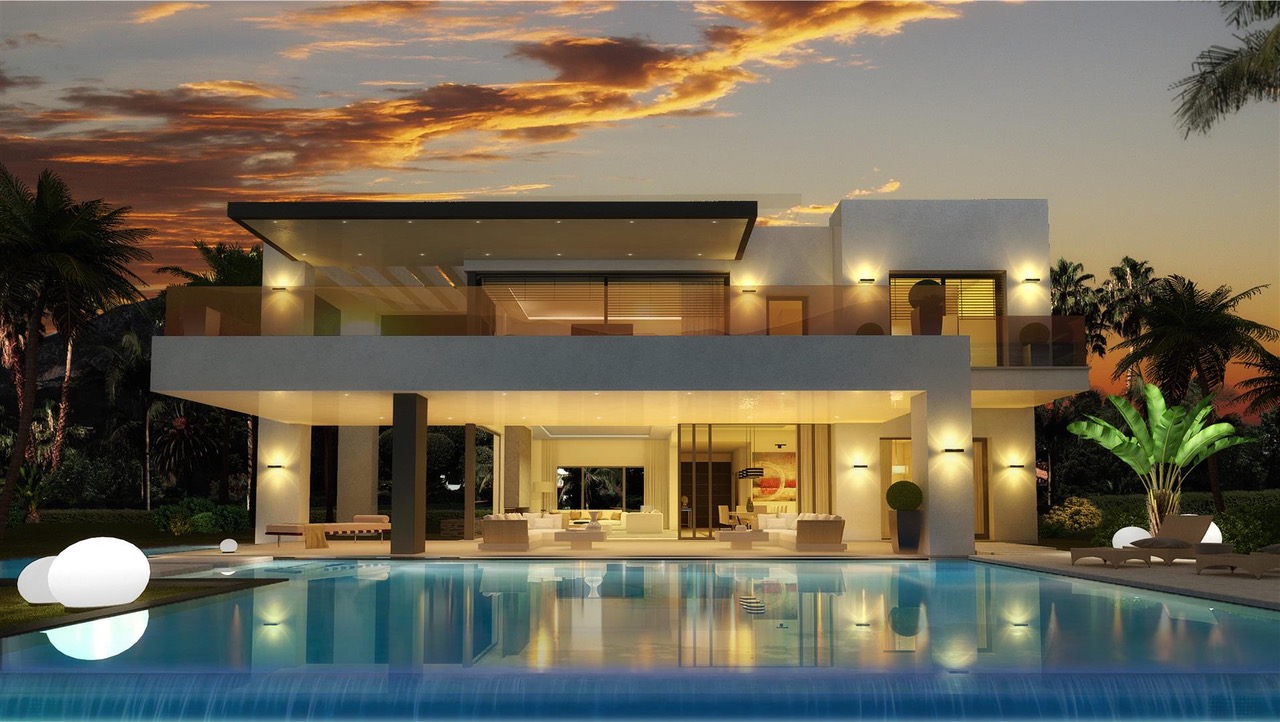 Marbella’s ‘Milla de Oro’ or Golden Mile is one of the most famous addresses in Europe. It represents a luxury lifestyle and its prestigious properties amply reflect its upmarket status. This six-kilometre stretch from Río Verde, east of Puerto Banús to Plaza Bocanegra in Marbella contains some of the most celebrated real estate in Spain, including a king’s palace.

Indeed, life in this oasis of sunny splendour is every bit as sumptuous as you might expect. It hasn’t always been called the Golden Mile; this soubriquet was coined by German singer turned property developer, Roy Boston, and it has stuck, largely because the name so accurately captures the ambience of this ‘millionaire’s row’.

There are two distinguished landmarks on the Golden Mile. The first is the Al Riyad Palace, which was built as the summer residence of the Saudi royal family. The complex, which resembles the White House, can just be seen from the road, but the gardens are illuminated at night with the crossed scimitars of the Saudi flag. The King Abdul Aziz mosque is open to all muslims and you can hear the call to prayer from the Puente Romano hotel opposite. The other unmissable feature is the Piruli tower, also known locally as ‘the copper tower’. It was constructed during the 1990s and marks the point where Marbella meets the Golden Mile.

The Golden Mile is an excellent location for sports enthusiasts and the facilities are top notch, as you’d expect. Golfers are perfectly situated for access to the golf courses of Nueva Andalucía’s Golf Valley, which includes the Las Brisas, Los Naranjos and Aloha clubs. Tennis fans can play at the Puente Romano’s famous tennis courts and watch the annual Senior Masters tournament, where stars like Boris Becker, John McEnroe and Mats Wilander make an appearance. The Puente Romano also has a first-class gym and spa. The Manolo Santana tennis club not far away is another popular spot and there are fitness studios, such as Dynamic Marbella, at Le Village on the road to Istán as well as in other locations on the Golden Mile. A variety of water sports are available on the beachside.

There Golden Mile also has its share of art and culture. The Palacio de Congresos hosts an annual modern art exhibition that brings galleries and artists from around the world to Marbella, whilst the Rallí Museum is mostly dedicated to exhibiting top Latin American artists but also has works by Dalí, Miró, Henry Moore, Chagall and others. In addition, the Puente Romano Hotel hosts a series of summer concerts at its tennis courts, and it is only a short drive from the Golden Mile to the fabulous setting of the summer Starlite concerts that feature Spanish and international artists such as Tom Jones and The Pretenders.

Dining out on the Golden Mile

This is one of the area’s most exceptional features. Michelin-starred restaurant Dani García is at the Hotel Puente Romano where you’ll also find a Sunday buffet at its Sea Grill and the Japanese-Peruvian eatery UNI. The arrival of internationally famous Nobu restaurant at the Puente Romano this summer is a stellar addition to its collection of restaurants and the MC Café at the Marbella Club Hotel is another chic establishment, as is its Marbella Club Grill. Other places of note are the popular Capuccino café at the Melía Don Pepe Hotel, while Villa Tiberio offers excellent Italian cuisine in a sumptuously romantic setting. Pan y Mermelada is the place to go for breakfast and brunch, and you will also find excellent Thai, Indian and traditional Spanish restaurants in the vicinity.

Beachside, there are upmarket restaurants and beach bars a plenty, including Victor’s Beach, Café del Mar and Besaya Beach.

The Golden Mile is also home to numerous shops, from large supermarkets to high quality interior design establishments, and the shopping arcades at both the Marbella Club and Puente Romano hotels have luxury brand outlets including Brioni, Gunni & Trentino, and jeweller Tamara Comolli. In short, Marbella’s Golden Mile is a top address for shopping, dining, nightlife and living.

If you would like to know more about living in and properties for sale on the Marbella´s Golden Mile, please contact our team.

This luxurious 5 bedroom villa is located in a small and private urbanization with 24 hour security, magnificent communal gardens and two swimming pools. The main features...

Magnificent villa ultra-modern with 5 bedrooms, only 2 steps away from the beaches and Puerto Banus! ... This exceptional property is located in one of the most privileged...

More
VILLA IN EL VICARIO ON THE GOLDEN MILE

Beautiful spacious villa in the herart of the Golden Mile designed in a classic style. This villa offers 5 bedrooms with 4 bathrooms and 2 guest toilets. This villa is built...